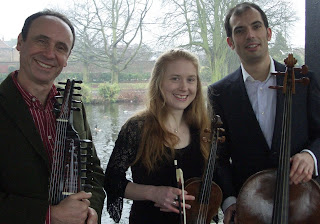 The Haydn Lute Trio was formed in 2000 and has been delighting audiences since with its widely varied programmes featuring the 18th century lute and theorbo in ensemble. Following the critically acclaimed ‘Lute music for a Princess’ CD (for ASV Gaudeamus) the trio have regularly featured in arts festival, music society and educational programmes contrasting rarely heard early classical Lute trios by Haydn and his contemporaries with the great violin sonatas of Bach, Handel and Corelli, using the theorbo as continuo. The Trio also include French 18th century repertoire in their concerts, with the pièces de théorbe en partition taken from the 1716 publication of Louis 14th’s court theorbist, Robert de Visée.

David Parsons - Baroque Lute
David studied at the Royal College of Music as a pupil of Diana Poulton. Since his Wigmore Hall debut he has performed at many of the principal European musical events as well as touring the USA and Scandinavia.
He has an extensive discography both as a continuo player and soloist, recording repertoire ranging from the early 16th century to specially commissioned 20th century works. He has made many radio broadcasts in the U.K and abroad, particularly in Spain where he has toured widely, and presented recitals of lute music for National Television.

Eleanor Harrison – Baroque violin
Eleanor completed her postgraduate diploma in Historical Performance with distinction at the Royal Academy of Music in 2006, where she studied baroque and classical violin with Nicolette Moonen and Simon Standage. She was leader and soloist with both the Royal Academy of Music Baroque Orchestra and Becket Ensemble under such distinguished directors as William Christie, Laurence Cummings, Margaret Faultless and Monica Huggett.

Miguel Calvo – Baroque cello
Miguel is from Pamplona in Northern Spain studied cello baroque cello with Alison McGillivray at the Guildhall school of music and drama in London. In addition he has participated in master classes with Jenny Ward-Clarke and Susan Sheppard and received his master’s degree in 2003. Miguel is now much in demand on the London early Music Scene working in chamber groups and teaching in addition to performing regularly in Spain.