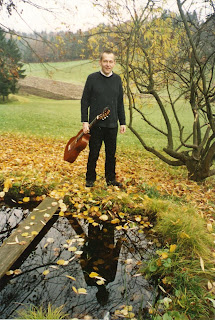 Dietmar Kreš was born in I963 and has been playing guitar since the age of 9. He was a student at the university of music and performing arts in Graz/Austria, was a student of Eliot Fisk in Köln/Germany and of Cacho Tirao in Buenos Aires/Argentina. He was prizewinner of several contests (Radio France/Paris, Fernando Sor/Rom, Franzico Tarrega/Benicassim, Manuel M. Ponce/Mexico City). Beside his teaching profession, he is always preparing for concerts at various festivals, mostly solo (Jeunesse musicales, Styrian autumn, Lucerne Festival, Austrian cultural forums in Turkey, Poland, Croatia, Czech Republic), sometimes in chambermusic (Staatsorchester Hannover with Garth Knox, Orchestra recreation in Graz).

Since the beginning of his involvement with music Dietmar Kreš has shown interest also in modern composers. So he started his discography with H.W. Henzes “Royal Winter Music”. The composer showed himself absolutely happy with this interpretation, observing that he had never heard his pieces so well understood and so technically mastered as by Dietmar Kreš: “One heard almost exclusively the music and the musical ideas. By musical means, he presented the characters as if he were a story-teller.”

A couple of visits to Buenos Aires, Argentina, inspired the artist to record his second CD with a compilation of Tangos and rhythms from the past. With this background he played many concerts in several formations, for instance with the Bandoneon-master Victor Villena.

The topical program offers an extensive repertory. The main part is formed of finds of musical collections of Gaspar Sanz and Igor Strawinsky, completed with some Tangos and pieces of Scarlatti and Mozart.