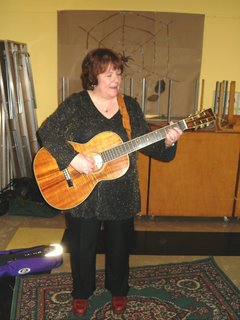 Anne was born a Londoner, but the family moved several times before settling in Cardiff, South Wales when Anne was ten years old. She was given her first guitar when she was thirteen, and taught herself to play. She was an active member of the Cardiff and Newport folk club circuit for many years, until she went to the University of Warwick to study French. At Warwick she specialised in medieval French and Occitan literature - mostly the stories of King Arthur and the poetry of the troubadours, and stayed on to complete an MA in medieval studies.

Her current career includes storytelling, workshops on voice (for those who think they can't sing), creativity and storytelling (for those who lack confidence) and songwriting as well as concerts. She has finally left her full time teaching post and is hoping to tour more widely and more frequently in the US, as well as in the UK and Europe. The singing, storytelling and workshops have taken her to an enormous variety of venues and audiences, from small intimate folk clubs and house concerts to much bigger events at folk festivals and larger concert halls, and to France, Italy, Greece and Spain as well as the US.
Anne's work always attracts attention - songs which take myths and legends and weave them into a new relevance. Songs which pack a surprising emotional punch through the ancient tales. A simple, direct approach to performance, laced with liberal doses of humour and a close rapport with the audience. Entertaining and informative, with a careful blend of traditional and contemporary references. Celtic, Saxon, Norman and European plaited into one variegated braid.