Born in Wales, Gerard initially studied the guitar with local teacher Jeremy Herbert achieving Grade 8 with honours. Gerard then went to Leeds University to study music, where he won a scholarship for a further year of study at Enschede Conservatory in Holland 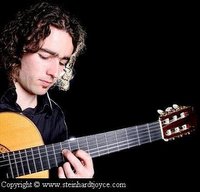 Since graduating, Gerard has won prizes in National and International competitions and performed extensively in Europe. Earlier this year he played in Portugal with the 'Operababes'.

Gerard made his Purcell Room debut last year where a reviewer for Musical Opinion wrote of his “beautiful playing and subtle phrasing”.

Cecilia Rodrigo has written "we have enjoyed hearing and congratulate you on your performances. I appreciate your kind words about my father's music and wish you continued success with his works. We will be sure to follow your career with great interest."

His debut CD of Spanish music entitled “Una Leyenda” has been played on Classic FM and BBC Radio and has received good reviews:

Gerard is currently preparing his 2nd CD and a teaching DVD.

The evening's programme include works by Brouwer, Taverner, Tarrega and Yoshimatsu, and new works by Gerard Cousins.