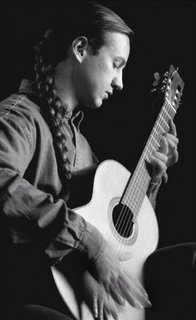 Brad taught himself to play guitar and compose at age 12. Six years later, with no formal musical training, he was awarded the Presidential Scholarship to the American Conservatory of Music in Chicago. After graduating, he won a scholarship to the Royal College of Music in London, where he studied with guitarist Carlos Bonell. He went on to win the Royal College of Music guitar competition before completing his Master's degree and returning to the US to continue his concert career.

Brad is well known as a soloist in North America and Europe. He regularly plays with orchestras and in duos with artists including the soprano Nancy Davis Booth and the cellist David Finkel, of the Emerson String Quartet. He is a frequent performer on radio and television in the US, and wrote the score to several episodes of a television series, The Desert Speaks.

Brad’s programmes consist mainly of his own compositions, which are inspired by the landscape of mountains and deserts in Tucson, Arizona (where he lives), and the folk stories of the Native North American Indians.